So as we woke yesterday we all found ourselves thinking of the atrocious 9/11 attacks in America, hardly conceivable that it was actually 15 years ago as the memories of that day are still fresh in my mind and sure to be more so for those directly affected by the appalling act of terrorism. It also led to thinking of the lives lost in wars against the terrorists.
As we were visiting family in the area and there were a couple of memorials my partner and I wanted to see we thought the National Memorial Arboritum would be a nice place to go and spend some time and pay respect to those who have given lives in these wars as well as many before who gave their life fighting for our country.

At the National Memorial Arboritum there are over 300 thought-provoking memorials, each with its own story to tell. Since planting began in 1997 it has been a special place to remember and honour those who have served and continue to serve our nation and has become a place of life represented by the thousands of trees planted there, a place for people to enjoy the natural surroundings and remember loved ones, particularly those who made the ultimate sacrifice for their country. The focus is not totally on military, there are large areas dedicated to the police, fire and rescue as well as ambulance service. There area also areas dedicated to national charities representing loss of those in particular circumstances, including children.
Sited at the heart of the arboretum is the armed forces memorial in remembrance of over 16,000 people and honours those members of the armed forces who have been killed on duty, or as a result of terrorist action, and those who died while deployed on designated operations. this memorial is currently undergoing a year long programme of repairs.

I am sure there are not many who do not have a relative or know of someone who has been on tour in Afghanistan, it was quite thought provoking and emotional seeing the Bastion Memorial as this is so recent and looking at the names made us grateful for those that came home to us. 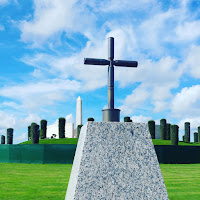 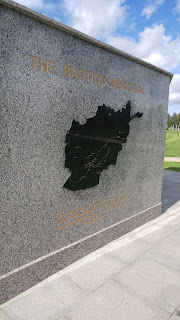 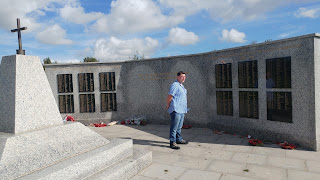 We visited the recreation of a world war 1 trench where there was also a memorial about the Christmas truce of 1914, on Christmas eve 1914, carols could be heard from both German and British trenches, some groups of soldiers met in between their trenches in 'no man's land', many wrote letters home about football matches, gifts and photographs, these hours of peace gave them time to repair trenches and bury their dead. the memorial reminds us that although we fight our enemy can be like us in many ways, this sculpture shows a British soldier shaking the hand of a German soldier and the football signifies the game that united the two sides 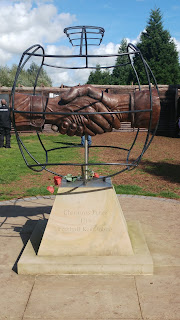 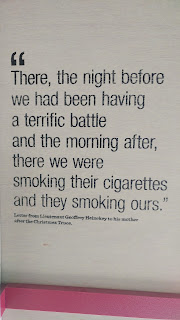 As mentioned the memorials are not always for those serving in the armed forces, one especially pulled at the heart stings as a mother, the Edwards trust tree of remembrance 'a leaf for a life' where each copper leaf represents a child who had died, the trust supports children and families who are facing loss and bereavement. 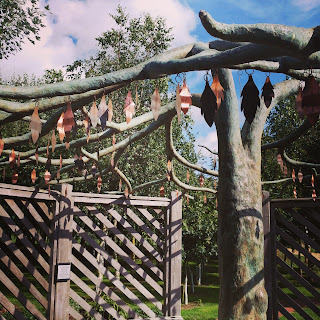 The beautiful surroundings and peaceful feel to the National Memorial Arboritum make it an ideal place to go and spend a few hours walking amongst the trees and taking in the many thought provoking memorials, and as there are always new memorials being added it is a place you can return to time and again, for me its a place to reflect and give thanks for those that gave so much for us to be stood here today, and I hope that this can be passed on to and educate my children as they accompany us.