With the dreadful weather we have been having it is a real bonus to be sent a new game to review - Sshh Don't Wake Dad, and what a brilliant game - the kids loved it, and so did i as it was easy for both kids to play and follow the rules so no arguments or tantrums!! Just plenty of laughter and of course the reward of cake at the end had to happen for real! 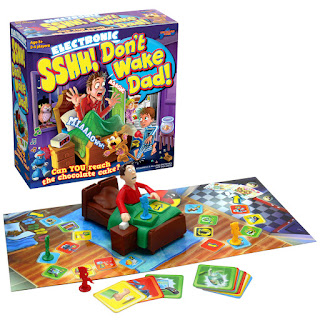 The kids found the game hilarious especially as the youngest let out a scream of fright followed by belly laughs every time somebody 'woke' Dad!! The aim of the game is to make your way to the cake in the fridge along the hazardous route attempting not to wake Dad, but if you do wake Dad its back to start for you!

So how does the game work...Simple really

Set up your board with dads bed placed in the slots provided, (switch on first to hear Dad snoring when placed in lying down position)
Each player then chooses a coloured playing piece (person) and puts them on the matching coloured slippers at the start position.
The playing cards are then dealt out to every player so each player has the same number of cards, if there is a card left over just place it to one side.
Players then take it in turns to spin the spinner. The spinner indicates the coloured space they are to move to, the player moves to the next available position of that colour.
Then, against the constant cacophony of Dad’s electronic snoring sounds (which give everyone the giggles!), they travel around the board. Most of the spaces on which they land feature a picture, and if the player already holds the card that matches the image, they are safe...... But if not, they must take a deep breath and press Dad’s alarm clock down the number of times indicated on the space… 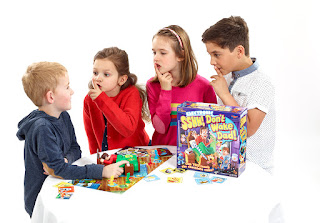 If Dad stays asleep, it’s “Phew” – and the game continues. But if he wakes up, the player is sent back to their slippers, to begin the journey again. But he or she does at least get to keep that hazard card, which will protect them should they confront that hazard again later in the game. Dad is then settled back down to sleep… Play continues, with plenty more twists and turns for everyone to negotiate along the way. Finally, one of them arrives in the kitchen. Here, the perils of Dad’s alarm clock have to be faced one last time…
The player presses the clock down… Everyone holds their breath… IF DAD DOESN’T WAKE, the player has reached that delicious slice of cake – AND WON THE GAME! 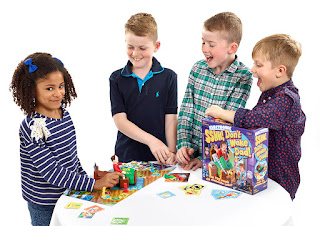 This game is guaranteed to provide hours and hours of fun for not just for the kids but adults too and a game the kids will come back to time and time again, as mine have. With such unpredictable weather and trying to balance out screen time, it is a great game to have in your collection and so much more fun than any game console.

For the chance to win one of these games, simply enter below