As a mum to two youngsters and a Pre-school setting manager i am always on the look out for things that will entertain, be fun but also develop skills in the children, learning through play is the key part of the foundation phase (stage) and is proven to be the most effective way of enabling children to learn.
Drumond Park have recently released a feature on just this and if you have not already seen it take a look here 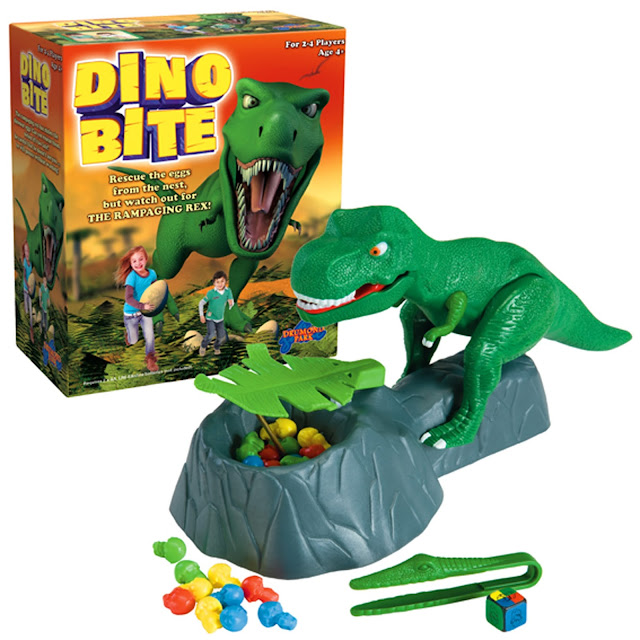 As part of exploring how Pre-school children learn through play i was sent a Dino Bite game from Drumond Park to review, as the object of the game is to remove the Dino babies from the nest without disturbing the Dinosaur, the game helps develop age appropriate knowledge of history and the world of dinosaurs by allowing discussion to take place naturally during play, it also develops these areas of the foundation phase (stage) -


So as you can see playing games is so much more than just 'play', my two loved the game and the tension waiting for the dinosaur to 'bite', and the use of tweezers gave that extra challenge when picking the correct colour out.

A little more from Drumond Park about the game.

Dino Bite (RRP £22.99) is a thrilling table-top action game for 2-4 players aged aged 4+. It sees them taking on the wrath of the king of the dinosaurs as they carefully try to pluck out the Dino Babies from right under his ferocious, gaping jaws, but they must beware.......with one wrong move, the Dino will roar out loud and lunge forward, revealing his massive blade like teeth to scare them away from his prize! 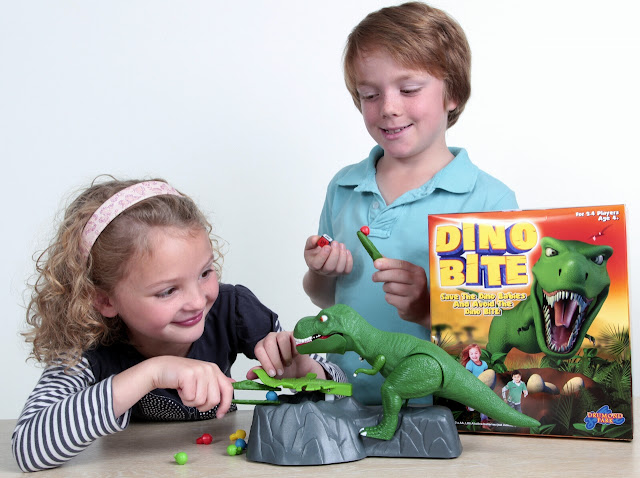 Dino Bite sets a colourful scene with its realistic jungle noises and fearsome T-Rex dinosaur perched on top of a Dino nest.  A large green leaf covers a collection of twenty tiny, helpless blue, red, yellow and green baby dinosaurs who’ve been stolen from another dinosaur’s nest, and are now awaiting their fate …

Each player takes it in turn to rescue an egg from the Dino nest with the tweezers supplied.  With each roll of the coloured dice they’ll find out whether they are aiming for a certain colour, have free rein to pick any Dino baby within their reach, or whether they have to miss a go.  Then it’s a case of gently, quietly does it… as they carefully lift the edge of the leaf, steadily move their tweezers into the nest, grasp the baby and lift it out to safety!  Or it’s fine for younger players to use their fingers instead of the tweezers, if they like.

But they must be beware, because if that bad-tempered old Dino knows they’re there, it’ll roar out loud and lunge terrifyingly towards them, stopping them their tracks. And that means the player is OUT!  If the Dino stays still, the player puts the rescued egg in front of him or her and passes the tweezers to the next player. The game continues until there is only one player left who hasn’t been caught out by the ferocious beast… and that player is the winner of the game!

If your young adventurers want the fun to last even longer, they can also play the game by counting up the number of eggs collected over several rounds, and the overall Dino Bite champion is the player with the most eggs.

This thrilling new game will provide hours of spine-tingling fun and laughter, and makes an unbeatable gift… ideal for the multitude of dinosaur fans out there, young or old, boys or girls - who can all enjoy the excitement together!

For your chance to win one of these exciting, educational games, simply enter below, good luck