After a lovely stroll and picnic today we wanted to have some chill out time at home, chance for mum and dad to have a cup of tea before the next round of adventures.

I had the Pickin' Chickens game waiting to review so thought this was a perfect opportunity to try it out, my two are 7 and 4 so it can be difficult to find games they can both play, this was brilliant as although they enjoyed playing it together it has two game options which meant we are also able to play with each one individually at a level suitable for younger or older children. 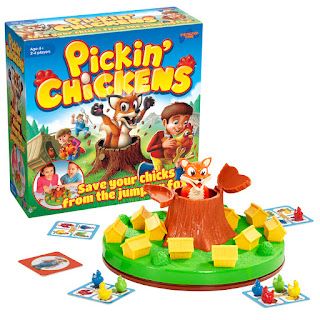 This lively fun game helps young people learn to take turns, recognise colours, make decisions and practise memory skills, all whilst they help the farmer protect their precious chicks from the sneaky jumping fox!!
The game has two levels of play - young chicks and older chicks, so a game to keep all the family happy!
The aim of both levels is to collect four chickens, in the young chicks version any colour will do but in the older chicks version it has to be one of each colour - red, yellow, blue and green.
To play the game the children sit around the rotating green field which contains twelve chicken coops nestling in the bushes, in the young chicks game, the first player gives the field a spin and when it stops each child picks a chicken coop to look under, dependant on the colour of the chicken revealed the child picks that coloured model chick and places it on the chicken space on the white side of their playing card

So......when the sneaky jumping greedy fox appears popping up randomly from his tree top lair like a jack in the box, giving everyone a shock, each player instantly loses a chicken - unless they hold the farmer card = lucky!! play continues until someone collects all four chickens needed to fill their card, and is then declared the winner

In the older chick level the same game play is used except the child uses the other side of the card showing four individual coloured chickens and players have to collect each individual colour chicken to match the card, if a player uncovers a chicken of the colour they already have they cannot take another and play passes to the next player. This level of play tests the memory as players need to remember where the coloured chicken is they need to complete their card or where the farmer may be found to help protect the chicks they have collected.

This simple yet highly effective game has just the right level of thrill and adventure to keep children from preschool age upwards engaged and returning time and time again. 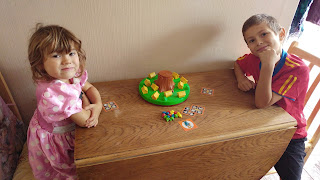 We had a fun filled afternoon trying out the game, which caused plenty of laughter and shrieks of shock as that sneaky jumping fox appeared time and again, I think this will be a firm favourite that all the family can enjoy, and might have to come along on holiday with us to fill some rainy afternoons in a caravan during half term break!!

For more information and stockists, visit www.drumondpark.com
Posted by Lorna Harrod at 09:00